Wondering WHY wayward spouses can treat the people they allegedly “love,” so horribly. 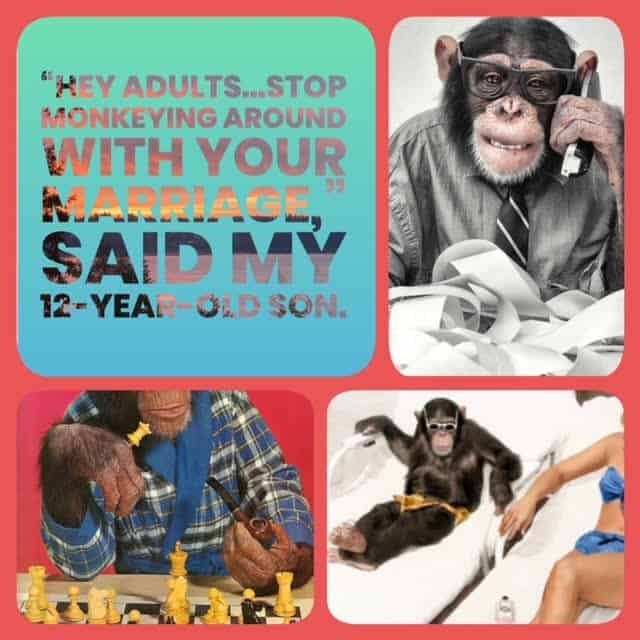 But here is what is most wrong with the graphic above. My 12-year-old has more wisdom in his pinky finger, than many adults.

My 12-year-old is well aware of the Bill Gates divorce. My 12-year-old asked me if, “Bill Gates was monkeying around with his marriage and finding younger women, and then throwing his wife in the trash.”

Clearly, the apple does not fall far from the tree. And yes, those were his EXACT WORDS.

Then he continued, “What’s wrong with adults? Why do they even get married, if they want a new human all the time”?

Being in my line of work, I absolutely had to agree.

Then, my son continued, “Why does a guy like Bill Gates, throw his wife into the trash, when she had his children? Why didn’t Bill Gates just marry a monkey IF he wants to money around all day”?

…Out of the mouths of babes, and perhaps my son, will even join me, in my ventures, one day.

For he is so very much like me when it comes to integrity.  He also wonders WHY people can treat the people they allegedly “love,” so horribly.

Most of all, betrayed spouses never wanted to be thrown into the pain of an affair. Most Betrayed spouses wouldn’t have gotten married if they knew an affair was in store for them.

My son continued, “Mom, it’s like some humans throw other people in the garbage, when they are done with them. Why would one person throw another person in the garbage? Humans have feelings and humans are not things!”

Yes, my son is great.

I thought deeper about this concept of throwing people away. I wondered if a philosopher, had ever addressed this topic of discarding human beings.

Let’s dive in to the topic of “throwness.”

Geworfen denotes the arbitrary or inscrutable nature of Dasein in the sense of its having been born into a specific family in a particular culture at a given moment of human history. The past, through Being-toward-death, becomes a part of Dasein. Awareness and acknowledgment of the arbitrariness of Dasein is characterized as a state of “thrown-ness” in the present with all its attendant frustrations, sufferings, and demands that one does not choose, such as social conventions or ties of kinship and duty. The very fact of one’s own existence is a manifestation of thrown-ness. The idea of the past as a matrix not chosen, but at the same time not utterly binding or deterministic, results in the notion of Geworfenheit—a kind of alienation that human beings struggle against,[2] and that leaves a paradoxical opening for freedom:

The thrower of the project is thrown in his own throw. How can we account for this freedom? We cannot. It is simply a fact, not caused or grounded, but the condition of all causation and grounding.[3]

For William J. Richardson, Geworfenheit “must be understood in a purely ontological sense as wishing to signify the matter-of-fact character of human finitude”.[4] That’s why “thrownness” is the best English word for Geworfenheit. Richardson: “[Other] attractive translations such as ‘abandon,’ ‘dereliction,’ ‘dejection,’ etc. […] are [dangerous because they are] too rich with ontic, anthropological connotations. We retain ‘thrown-ness’ as closest to the original and, perhaps, least misleading.”[5]

Leave it to German philosophers to adequately describe human misery. And so the term “thrown-ness” was born.

The paradox: a 12-year-old boy can actually see that adultery is wrong, and that adultery is very much like throwing another person in the trash, hence leading to objectification of the person who was thrown into said trash can.

This begs the question: Why can a 12-year-old make this observation on his own, understand the devastation, and be able to articulate his observations, in a way that certainly strips bare any romanticism, associated with infidelity?

My son was speaking the truth as he saw it.

So, tell me…does this article resonate with you?

Was there ever a time when you felt discarded?

If you are a betrayed spouse – whether you felt discarded or not – please remember these things:

-You did not cause infidelity.

-You did not create infidelity.

-You did not choose to be betrayed.

-And most importantly…as a betrayed spouse – it is IMPOSSIBLE to make your spouse cheat.

1 Response to "Wayward Spouses…It Is Time to Start Adulting!"