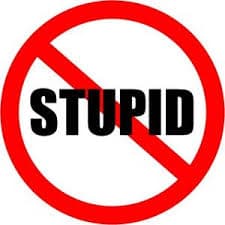 Several months ago I wrote a post about the stupid things Doug said while in his emotional affair, and got to thinking that I also did some stupid things.

Well, at least some things that sure wasted a lot of my time when I could have been having a pedicure, eating a bowl of ice cream, or getting a massage by a gorgeous masseuse.

Most of these wasted activities were related to my pseudo-obsession of the other woman. I wonder if any of you can relate to these:

I really regret all the time and effort I spent on the OP after Doug’s emotional affair.  I believe that if I would have let her go and stopped making her fantasy so important we would have healed so much faster. I allowed Doug’s fantasy of her to become mine and I believe I had a more difficult time letting go of the fantasy than Doug did.

I really haven’t figured out why, but I know I need to stop letting her get to me.  She has been out of our lives for over two years and it is time to bury her and any memory that is associated with her.  I know in all the healing and recovery I have accomplished after the emotional affair this is my last feat and I know I will conquer it and move on.

I’d love for you to add things to this list so I don’t appear so neurotic! 😉