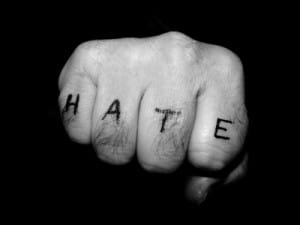 Believe or not this is totally uncharacteristic of me to have such negative feelings against another human being.  Generally, I try to see the good side in everyone.

Realistically, I know I hate the emotional affair more than the person I am attacking, but right now I feel that this is a healthy way to let go of my anger.

I know that I can’t hate Doug, even though he is as much to blame as she is, because that would hinder everything I am trying to do to save our marriage.  And sorry to all you men out there, but women have a way of manipulating you like putty.

Unfortunately, that power erodes when you have been married as long as we have.  So along with my top list of stupid things said during an affair this is my “I hate you Tanya list.”

There.  I’ve got that off my chest.  Believe it or not, I feel much better now.  You should really give this a try.  This allowed me to take some of the burden of their emotional affair and transfer it out of my mind, if only for a little while.

124 replies to "After the Emotional Affair: I Hate You!"